The Bank of Canada maintained its target for the overnight rate at 1.75% for the ninth consecutive policy announcement, keeping the key interest rate stable for all of 2019. Today’s decision was widely expected as members of the Governing Council have signalled that the Bank is satisfied with the performance of the Canadian economy.

The statement was undoubtedly less dovish (i.e., consistent with a rate cut) than in October, noting that there are signs that the global economy is stabilizing, though trade remains the most significant downside risk to the outlook. On inflation, the expectation is for a continued run around the target 2% rate, though gasoline prices will cause some headline volatility over the coming months. Finally, “Governing Council judges it appropriate to maintain the current level of the overnight rate.”

While the risks to the outlook for the BoC remain skewed toward a rate cut, it doesn’t look like policymakers are in any hurry to move at this point.

The BoC does remain concerned about the global backdrop and potential risks for the domestic economy. In recent days, stock markets have sold off sharply as President Trump opined that a US-China trade deal is not likely ant time soon.

The White House has lately threatened a new round of tariffs on many countries, including Canada, and warned of a possible reinstatement of steel/aluminum tariffs on Brazil and Argentina. The United States threatened tariffs on US$2.4-billion of French imports in retaliation against a French digital services tax, raising concerns in Canada that Justin Trudeau’s minority government will also face backlash from Washington if it proceeds with a campaign promise to impose a similar levy. US businesses have complained that the Canadian tax proposal would violate the intentions of the new North American Free Trade Agreement — called the U.S. Mexico Canada Agreement or USMCA — which allows for digital levies but prohibits discriminatory tax treatment. The deal is currently awaiting ratification in the US, where Congressional Democrats have been demanding changes to labour and environmental provisions.

On the domestic front, the central bank believes that the underlying details of the as-expected slowing in Q3 GDP were decidedly more positive than the headline 1.3% growth rate suggested and highlighted the stronger than expected rise consumer spending, housing and business investment. The press release stated that “housing investment was also a source of strength, supported by population growth and low mortgage rates. The Bank continues to monitor the evolution of financial vulnerabilities related to the household sector.” Housing was robust in Q3, accompanied by a re-acceleration in mortgage credit. While the BoC seems comfortable with this evolution, it will be monitoring credit growth.

Labour markets have been robust, inflation has been locked right around the 2% target range, and wage growth has strengthened. While growth headwinds remain, the bank is balancing these risks against those associated with re-inflating household credit growth (mostly via recovery in housing markets) from levels that the BoC has argued are already worryingly high.

“Fiscal policy developments will also figure into the Bank’s updated outlook in January.” Tomorrow’s Throne Speech is vital for the Bank of Canada. Governor Poloz said in October that $5 billion in fiscal stimulus is roughly equivalent to a 25 basis point rate cut. It looks as though the BoC would prefer that fiscal rather than monetary policy do the heavy lifting to offset the headwinds from the global trade war.

Bottom Line: Governor Poloz appears to be satisfied with his stand-pat policy with only six months left in his term as Governor. Today’s statement was much more sanguine than the more cautious tone struck in October. The risks around the economic outlook remain skewed to the downside and, while the same can be said for policy rates, some anticipated fiscal stimulus will likely provide the Bank of Canada with some breathing room. Barring a negative shock to the economy, it looks like the BoC could be on hold for some time yet. 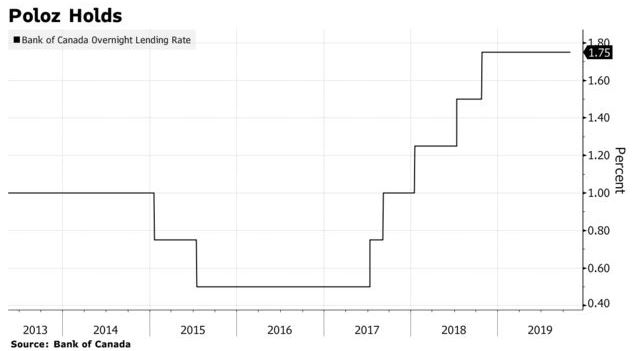